A Young Artist in his Mid-Century Modern House 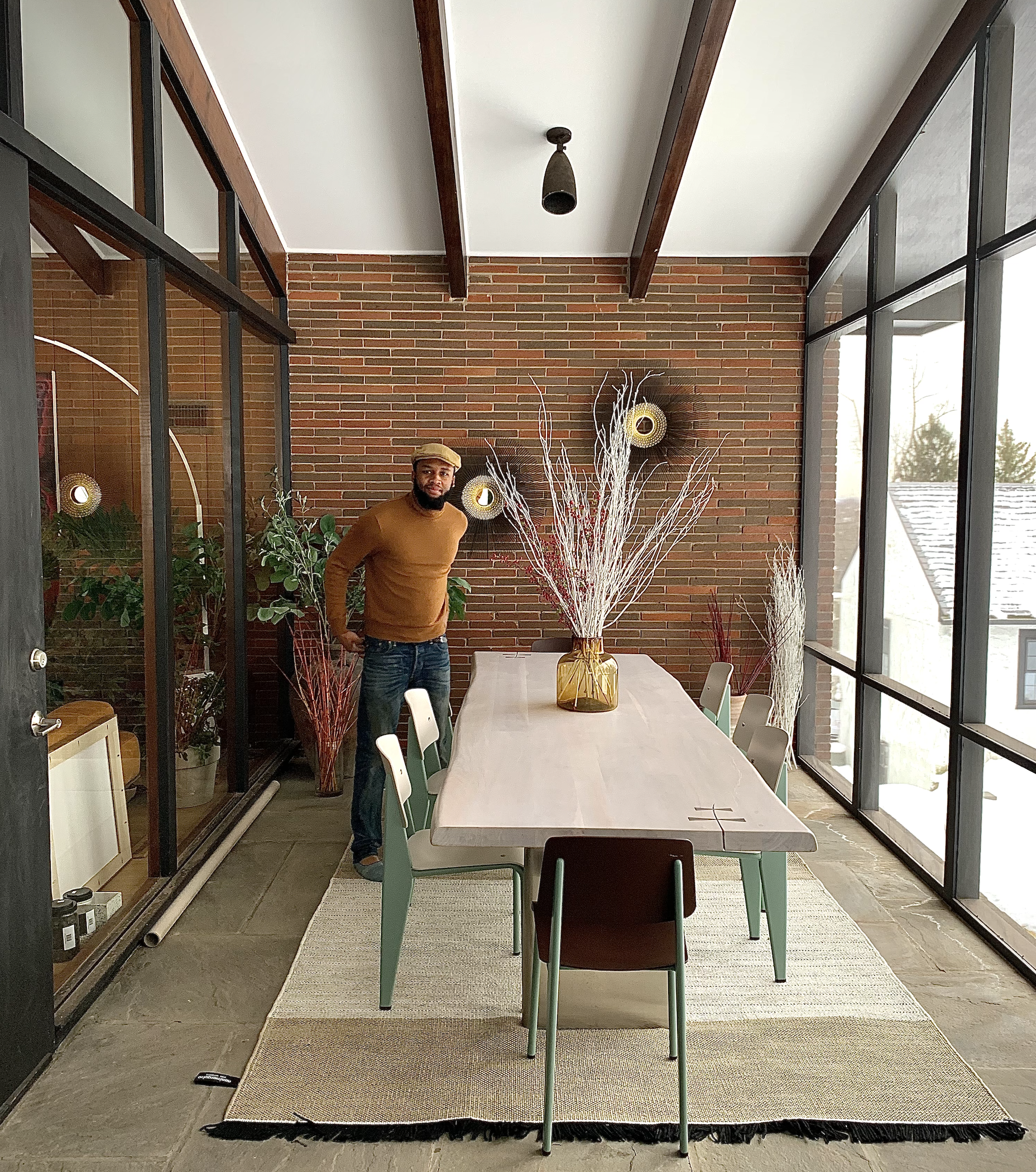 Vaughn in his screened in porch.

Last June I received a call from a young man in his twenties. He told me he had just bought a mid-century modern house in Maplewood, NJ, and wanted my help to update it for him, his wife and kids. He told me his name, and that he was an artist. Google “Vaughn Spann”, as I did and you’ll get about 500,000 search results. This painting superstar who is setting the art world on fire, has now quietly moved into the modern haven we have made for him and the family he clearly adores. I visited him last week for his take on where contemporary art and modern architecture intersect.

Gary:   How did your artistic sensibility influence the kind house you were looking for?

Vaughn:   I’ve always wanted to live in a modern home, it was ingrained in me and I knew my whole life I needed to be in one. I guess painters really gravitate towards them; the expansive picture windows, the lines, the geometry, the form … the way in which they are integrated into nature and their surroundings.

Gary:   How did you end up in Maplewood?

Vaughn: My wife grew up in Maplewood and she always wanted to live back here once we settled down. But Maplewood doesn’t really have any modern homes. It’s full of colonials, which I have immense respect for -I grew up in a colonial house- but as an artist I needed something that really speaks to me.

And then we found it! We were so happy; I remember we were driving along Wyoming Ave en route to look at some modern houses in Millburn, when we noticed this “coming soon” sign at this house, and we were freaking out, and I was like, “This is the house! this is the house we need!” I was so ecstatic about it because I just knew for sure that’s the house I wanted to live in, and it was in Maplewood! So I guess it was just meant to be that we should stumble across this house.

We hounded this realtor; our one concern was is it large enough? We were like, “I hope it’s a five bedroom. I hope it’s not a three bedroom,” because when you see it from the street, you think the house is much smaller than it actually is. So when we found out it was a five bedroom, we were jumping for joy because that was so unexpected, you know?

Gary:   Did you always have an interest in architecture, as you were developing as an artist?

Vaughn:   It’s funny because my dad wanted to be an architect. He went to architecture school briefly, but then once he and my mom found out that they were going to have me -which they didn’t plan for- that put him on a totally different career path.

Although that is something about my dad that I always remembered, I didn’t grow up thinking about architecture, and didn’t really even think about art as a profession; it was just something that I intrinsically did. Only later, probably after undergrad, when I would travel more, and I would see these immaculate houses, or I’d open up books and see just beautiful structures, and especially being so close to New York City, architecture began to catch my eye more and more.

Gary:   So when you found this house and you realized it needed an overhaul, did you have a vision for it off the bat? Or do you feel it evolved organically as you went along? And I’m curious whether it reflects in any way how you work as an artist when you have a blank canvas in front of you?

Vaughn:   Well, you know me, I can be a little impulsive. I tend to act quickly because ideas keep coming at me, a shark mentality where it feels like I need to keep swimming, keep moving. The house needed work, and I was trying to figure what it was, to make sure it was on track to becoming the house of my dreams. 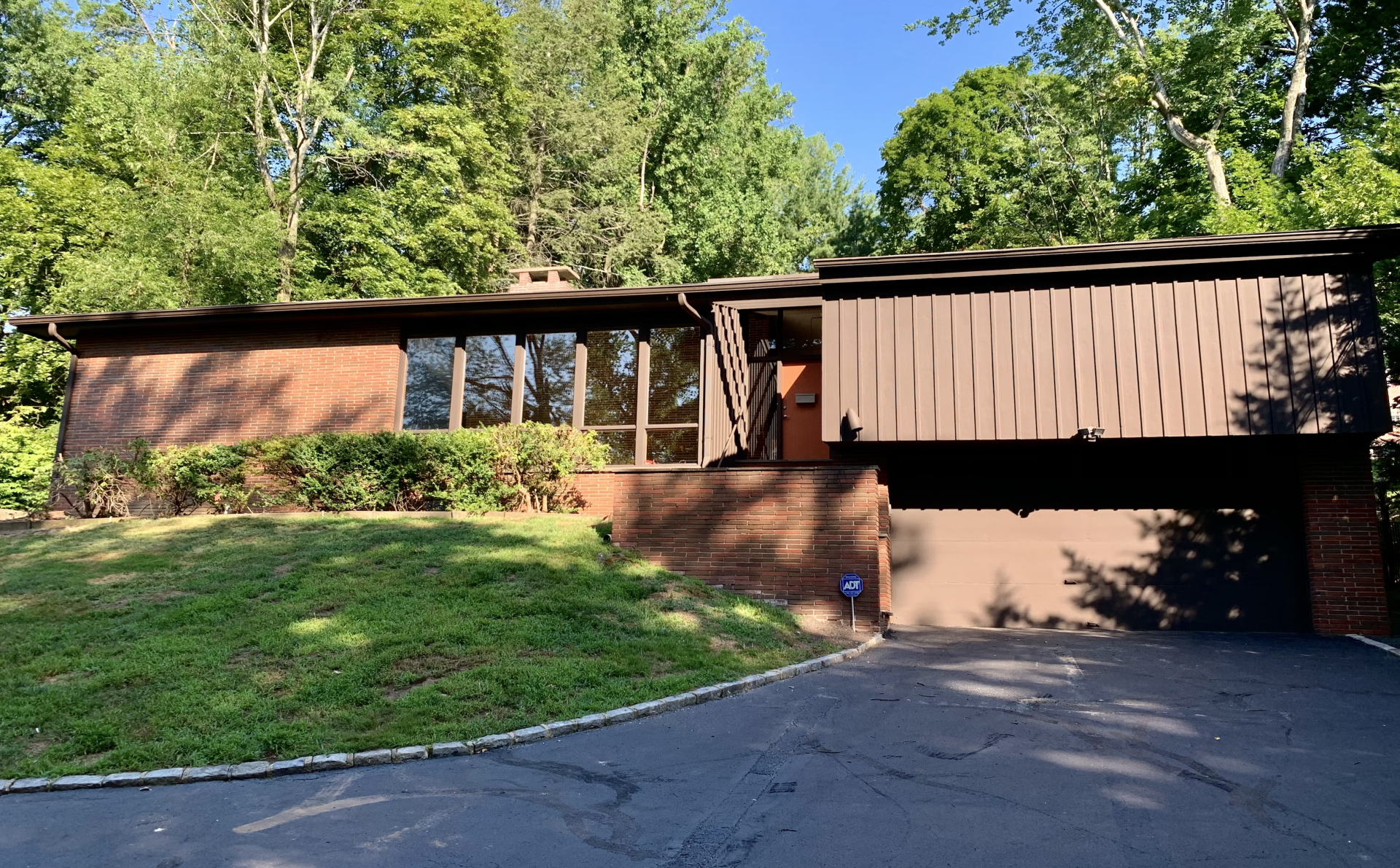 A gem in the rough. (Pre-renovation.)

Vaughn:    And before I even signed our client/architect contract, I was like, “Gary, I’m cutting down these trees. Gary, I’m doing this to the landscape. Gary, are we grading this?”  I was so obsessed on revitalizing the street view, no matter what was going to happen inside the house. It had massive oak trees and black gum trees completely hiding the house. You would completely miss the house when you walked by, but now you see people walking down the street actually taking notice of the house, really seeing the house for what it is for the first time. Its line, its form, the brick. So that was really nice, to tackle the outside of the house first, and that initiated the vision for the rest of the house overall.

Now if I think of my studio, it’s pretty organic, where I have a wood panel or a canvas, whatever that material may be, and I jump into it and figure out how it evolves from there. It’s like an ebb and a flow … a little bit of a fight for the most part. And in the same way a house is created over time, you add those layers to it, and then more layers to it and it becomes overly layered, becomes very dense and then, boom, it appears and has this quality that you, as a creator are looking for. I feel like that’s a parallel to the way in which revamping this house really happened, as well.

Gary:   So when you start with a canvas, you’re not contemplating what the vision is, you just dive into it and just keep moving, right?

Vaughn:   Every artist is different. There are artists who are very calculated as painters, but for me, it’s more intuitive. I like to feel it and jump into it and see. There’ll be mistakes, there’ll be revisions. I might block out the entire thing, but that’s how I naturally work. But I do respect other creatives who really have that planning.

Gary:   Your work has a very emotional impact.

Vaughn:   That’s the one nice thing about abstraction, too. Because if you think about a historical painter, someone like the Renaissance painter, just older artists from centuries ago, a lot of the works had to be very planned and very calculated. But every artist is different and we all have a different visual approach to things. And I feel like that’s where I am.

Gary:   What do you feel you most brought into the design here, in terms of form or color or texture, or was it a mix of all three?

Vaughn:   It’s a mix. I think as an artist that works a lot in series, I can kind of assess certain series that feel they relate a lot to ideas in the house. 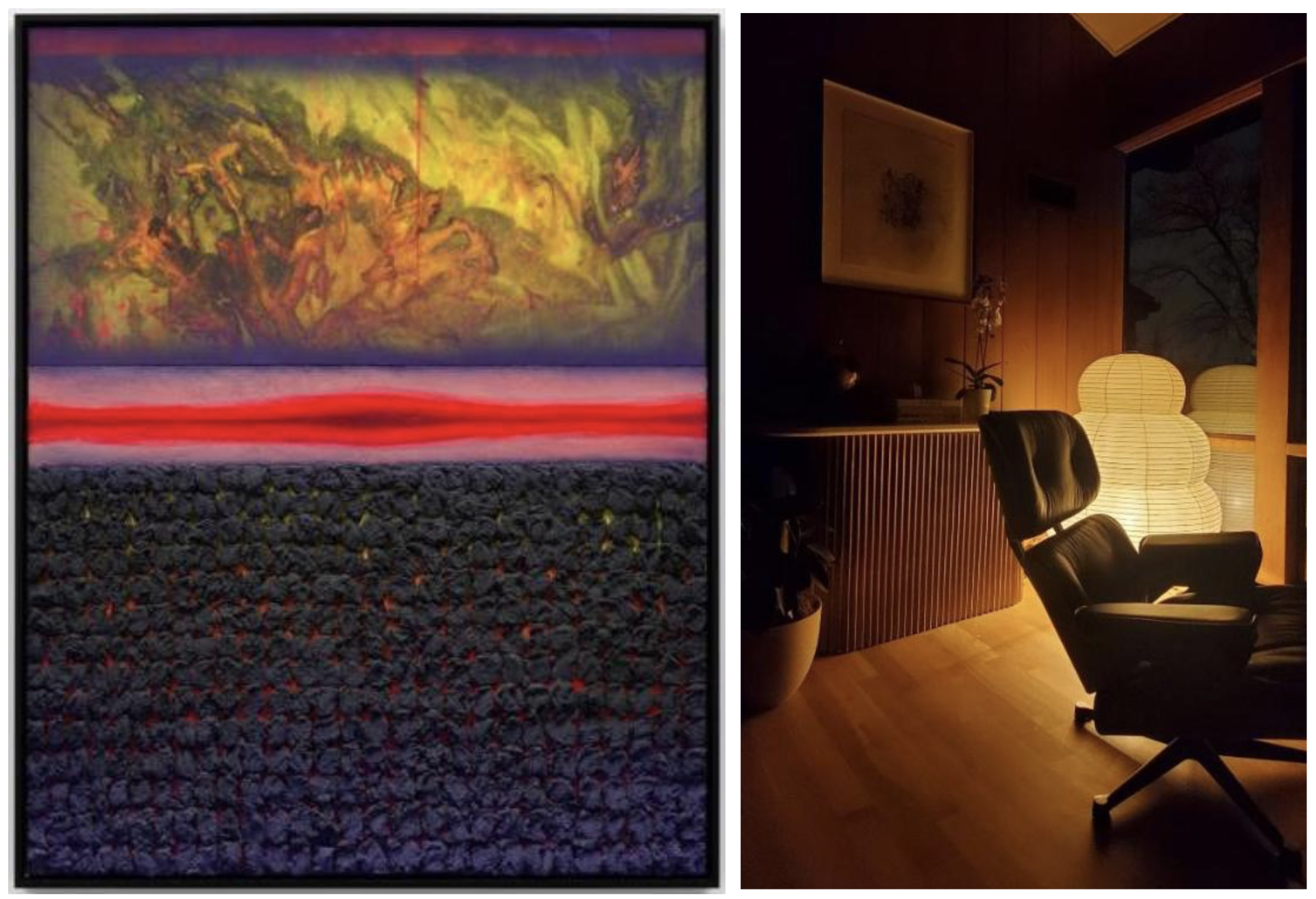 I had mentioned to Vaughn the interesting relationship I found between this painting and this photo he posted on Instagram.

Vaughn:   I think the perfect parallel that you brought up was the painting you showed me, but in relationship to something like the Noguchi light, I love not just because of the light or the way in which a lantern glows. I think it was also a lot about weight and density. I think a lot about how heavy things are, how light things are, as well. So, that painting in particular is from my silk paintings. The top half of that painting is actually transparent layers of silk that build up and find each other so that you’re seeing almost through a veil. And then the lower half is extremely rocky, very rigid. It’s a dense impasto layer. So you have this balance where it almost feels like landscape. It feels like one is very air-like, and the bottom half feels almost like the earth, like the gravity’s weighing down.

Gary:   You’re used to facing deadlines in your studio because you’re shipping your work out all over the world. And here, you had a deadline with a baby coming.

Vaughn:   I had quite a few deadlines, actually. I think when I met you I was preparing my big show in Brussels. My gallery, Almine Rech Galleries in New York, Brussels, Paris, Shanghai -they’re everywhere- but the Brussels gallery is their largest; it’s massive. So this show is one of my largest, and there were a lot of walls to fill. It was a lot to complete. So this on top of the renovation project, and on top of expecting a newborn. It was a lot, talking about anxiety and deadlines. But I managed to ship up the show to Brussels, it was hung on time. The baby arrived healthy, thank God. And then we just had the tail end of the actual renovation to get through.

I visited Vaughn in his studio just before he shipped his show off to Brussels.

Part of the renovation, we opened up between the living and dining room, new terrazzo tile flooring and all new kitchen.

Gary:  In your studio you manage assistants and people doing custom canvases for you. So you’re used to directing people to create a finished product. On the renovation, you were very involved with managing this on your own, buying materials and supervising the contractors. How was that similar to running your studio?

Vaughn:    I’ll tell you one thing, I always reference my age. I’m 28. So for me, just the level of success I’ve had this early on is something that you have to learn as you grow. So for me, in my studio, I’m in my own element where I know the parameters. I know the protocol, I know a lot about what the materials are, what I’m doing, my vision and that’s just my space, in that regard. And this house is my space, too. But it’s also when you’re dealing with other folks and other contractors, other people on project, it’s a different collaboration.

I try my best to create through lines of how to get through the project and how to speak up and how to get my ideas across. So there’s a lot of learning through trial and error. A lot of this house still comes with lots of imperfections. We didn’t change everything. There’s still a lot of things I would address, I would have done differently. But it feels like a parallel is to painting, in certain ways. Where certain mistakes become part of the work, they become refreshing. In certain things, you’re like, “Damn it. I should have been a little bit sharper in that.” But I don’t know, it was very interesting to collaborate with other people on this house. Because you really learn a lot about yourself, you learn a lot about your ideas and it’s definitely a challenge, to say the least.

Gary:   Were there any things you learned here that you brought back to how you do things in the studio? Or do you feel like you already had your studio thing down?

Vaughn:   I think patience is one of those things.

I think this house has really forced me to slow down. It’s really become my pride and joy. I can now sit and look out the big windows and look at the plants and have time to really think about things … I can visualize new dreams, new goals. It gives me a moment to breathe because in the studio, it’s nonstop, it’s like a marathon, legitimately, it’s just nonstop.

At home and in the studio. 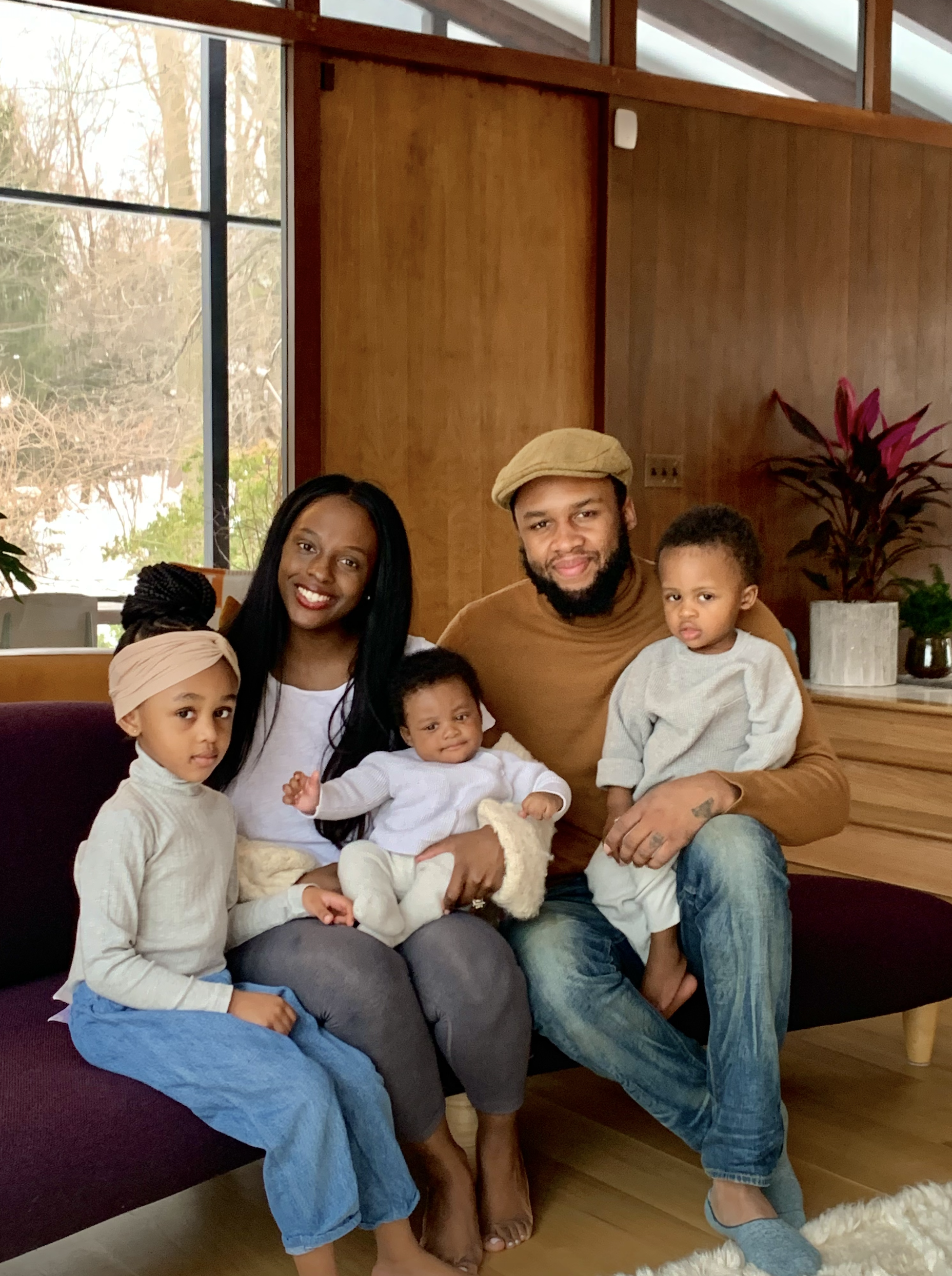