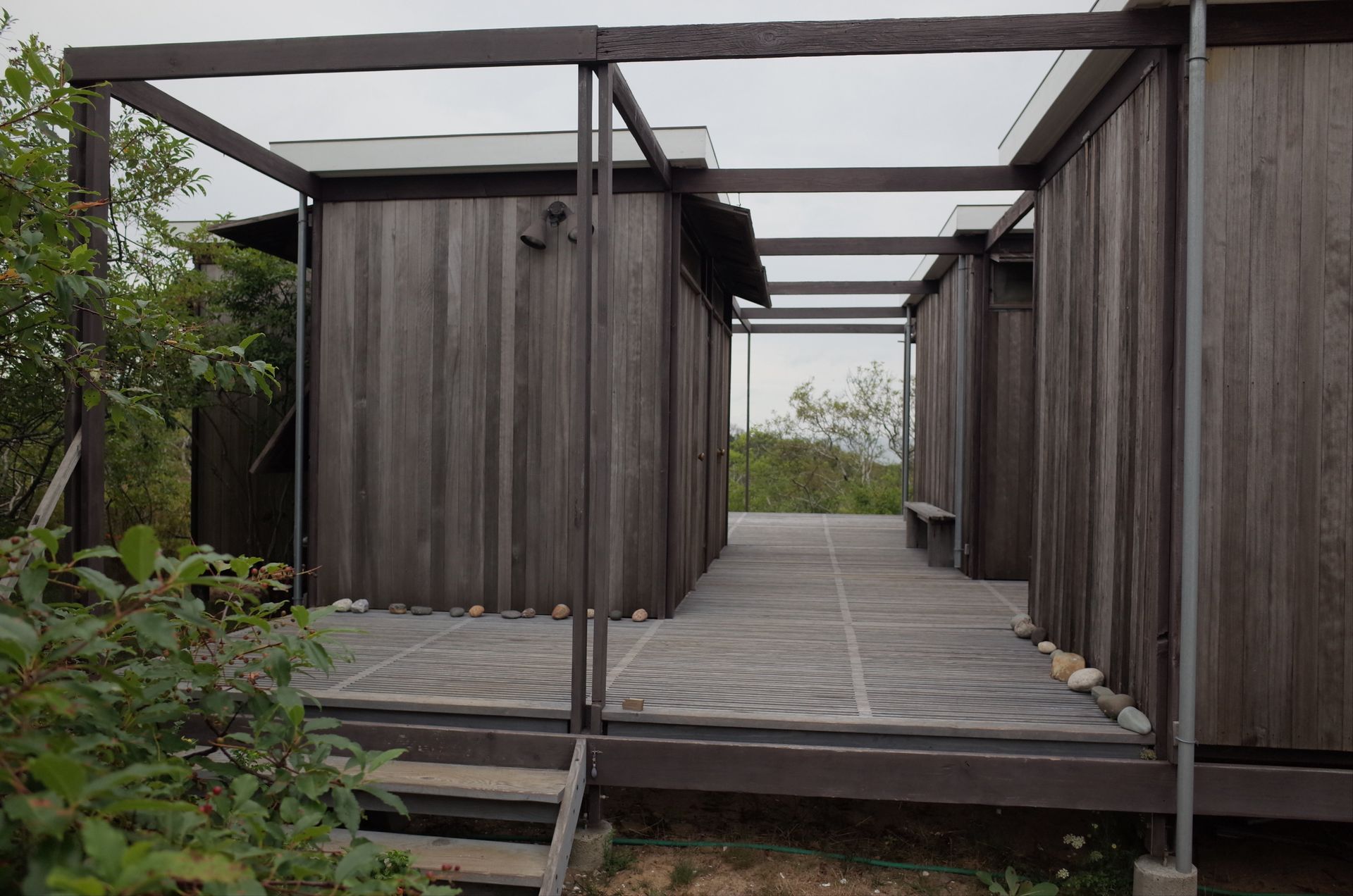 Vacation Homes in the Woods

On our annual vacation at the tip of Cape Cod, we lucked out with timing to be able to go on a tour of 3 modernist houses in Wellfleet. Wellfleet became a hub for artists and creative types in the late 1930’s- land in the mosquito infested woods was cheap, and people started experimenting with building simple modern summer houses by the ponds. Most were built without architects, owners and tradespeople collaborated in developing ideas that reflected the modernist trends that were just starting to come over from the Europe. They were mostly built inexpensively. Curtains close off closets, kitchens are inexpensively built with open shelving- no luxury cabinets or granite here. Everything has an ad hoc feel, but what was achieved were homes that truly expressed a new modern idea of what a house could be, and felt appropriate to the rustic natural setting.

Many of these homes now sit within the Cape Cod National Seashore, created in 1961, and were designated for demolition and/ or neglect by the Park Service after a 25 year least back to the original property owners had expired. Thanks to the work of some local preservationists, the Cape Cod Modern House Trust acquired long term leases on three homes within the park area. They have been restored and are now rented out on a weekly basis.

The Hatch House was the most interesting of the three in terms of it’s bold vision and execution. The living spaces are in separate pavilions connected by a slatted deck that wraps around and between the structures. You have to go outside to go to a bedroom or bathroom, insuring constant engagement with the elements. The house feels expansive in a way that masks the tiny rooms, with its commanding view of the bay and the outdoor spaces between rooms.

The large panels that fold down to close up the house were very reminiscent of the Paul Rudolph designed house in Sarasota that I wrote about in a previous blog.

The interior has been completely furnished with original items that the owner had stored once their lease on the land had expired, simple but elegant.
Paul Weidlinger was a structural engineer who built this house for himself, a floating box lifted off the ground disturbing little of the natural landscape and providing views through to the pond as you approach the house. The structural grid is infilled with alternating solid surfaces of various materials and expanses of glass or insect screening.
The Kugel/ Gips house was clearly inspired by Frank Lloyd Wright’s Falling Water. The cantilevered structures form a familiar image. Corner windows were used to break the box and extend views in oblique directions. There is strong contrast between exposed concrete block walls, cedar detailing and these glass corners that allow the interior to expand into the landscape.
I admire the adventurous spirit of the builders of these houses, seeking new ways of creating forms and living spaces on tight budgets. The expectations of homeowners today is for a much higher degree of finish and amenities, but these little houses in the woods provide valuable lessons about the joys of living in a simple yet exhilarating way.