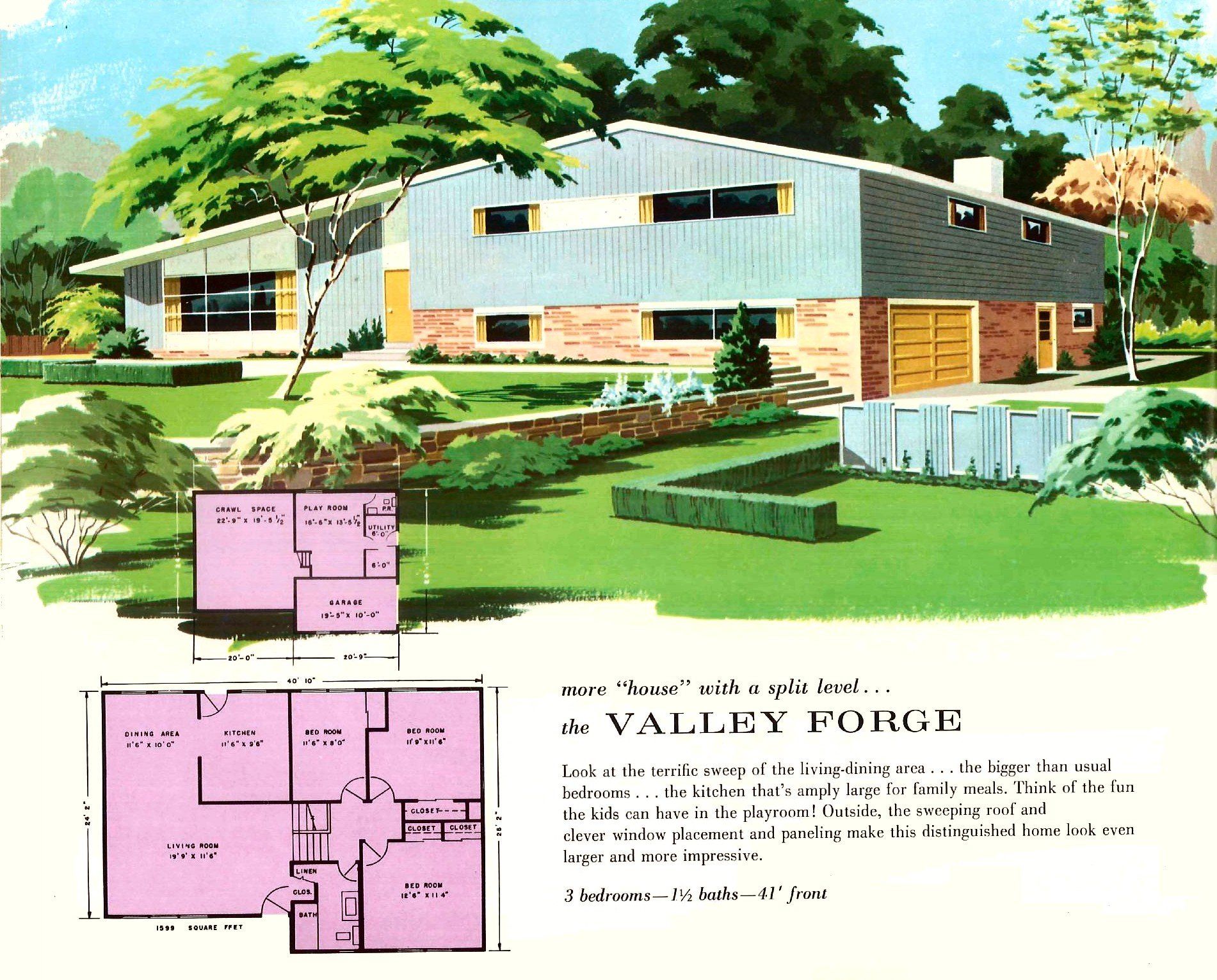 The Other Mid-Century Style

I sometimes refer to split levels and ranches as “The Other Mid Century style”. They may not quite call to mind the classic mid century modern houses that have become so desirable, but with a little imagination, they do offer a great opportunity to create a modern home for this century.

I grew up in a 1958 split level house in suburban Philadelphia, and I remember even as a child recognizing the distinctively different feel from my friends’ traditional colonial houses. The more open plan, cathedral ceiling in the living room, and the 50’s decor seemed so cool by comparison. And the half flight up to the bedrooms and half flight down to the playroom seemed so easy compared to the conventional three level configuration.

Split levels and ranches became popular during the post WWII suburban expansion and reflected a desire for a more modern style home. The splits worked well on sloped or smaller sites, offering an open layout, yet more compact than a spread out ranch. In some homes, the arrangement allowed for cathedral ceilings in the living room since there was not a second floor above.

Somewhere along the way, split levels became something of a pariah. These houses generally lack both the design sophistication of a classic mid-century modern house from the same period or the character and charm of a traditional Colonial or Tudor. When found in neighborhoods with high land values, they often become tear downs that make way for more conventional Colonial style mansions. But from my experience and what I hear from local realtors, there is a growing demand for more modern homes, and these splits and ranches may be the best bet short of building a new house from scratch.

The split level modernization projects I’ve done have mostly included additions and exterior “curb appeal” makeovers. A common addition is adding a level above the one story portion, usually for a master suite and other related spaces. Addition on the back can create a larger kitchen or family room space. One project completely re-conceived the idea of a split level, and resulted in a dramatic home with the different levels intertwining in unexpected ways.

In this project, the client wanted to add a larger kitchen and family room to the back of the house, along with a new deck. This freed up space for a powder room and large pantry area at the living level. At the upper level, the space was reconfigured to provide a more generous master suite, eliminating one bedroom. A new bedroom and bathroom was added to the lower level in the area that had good window exposure. The existing entry sequence from driveway to front door was unwelcoming and included an un-needed circular driveway that was too close to the front door. Our design included a re-working of the front landscape.

This house already had hipped roofs, and our window and material choices helped to further modernize the overall look of the house.

The owners of this house had outgrown the space and embarked on an ambitious plan to enlarge the home and create a more modern expression. The neighborhood was full of these same style homes, but one by one, they were being torn down and replaced by the traditional style homes that developers were putting up around the state. For this project, we kept the original foundation and basic premise of the split level, and proceeded to create a modern home more in keeping with the mid-century spirit of the original. We had to submit for a variance to move the garage entry to the front of the house, and among the comments from various township departments was this very gratifying observation.

“The Historic Preservation Commission commends the owner and Architect for their proposed transformative design of one of the tract mid-century split-level homes- typical of the neighborhood- into a modern home in keeping with it’s mid-century influence. As an expression of its own time, the diagnosis is properly scaled to the neighborhood, and successfully addresses the site conditions, and utilizes material appropriate to their proposed use. We also like that the proposed design resists the common ersatz new-traditional inclinations that are becoming common in this neighborhood. No objections.”

The stair down was reconfigured to make a better flow from the new mudroom off the garage as well as new basement space under the rear addition. Setting the master suite second floor addition back from the front allowed a high ceiling area in the living room.
Scotch Plains, NJ

These owners lived in the neighborhood and were looking for an opportunity to create a modern, larger home nearby. This property met their need in terms of the location and the property size and character, and included a forlorn split level house that could easily have been a candidate for a tear down. Instead, we decided to retain some of the basic structure and proceeded to make additions and reconfigure space to create a home that took advantage of the various levels in ways that added to the interest of the architecture- resulting in a design that couldn’t have been achieved if a new two level house had been built instead of retaining the split level structure.

The two patios at the back also reflect the split-level nature of the house. The connecting stair follow the interior stair form the kitchen to the lower level dining/ living/ guest room spaces.
The lower level now has two stairs down, one from the entry foyer, one directly from the kitchen. The balcony space above acts as a private congregating space for the family, with a piano tucked in.
See this full project here.